The title of the stream on Sunday is under the motto FreestyleColor. For me it means painting with colors in freestyle. That I chose Color in the American spelling is intentional. The second language of the homepage is also designed for American English.

I’m practically at the very beginning with the FreestyleColor! And on Sunday I treat myself to a painting day …

There is nothing new about pictures with you, I was addressed today. But! I wrote in the last blog that I would no longer post new sketches here in the blog. That’s why I have the Gallery-> Practises and Hidden Creatures. Sometimes I manage to make portrait sketches, sometimes I have time for the hidden creatures. Here I will only show WIPs, i.e. pictures that are still in progress.

Welcome to the new week

June goes and July starts this week! Time’s running. It’s time to think about Christmas motifs again.😊 But now Tuesday comes first. The picture from Sunday is in the practises gallery. I will paint another Freestyle Color picture. This time i use Arches Torchon paper. Not exactly a popular paper for some painters. It’s a grainy paper. I have to think of appropriate motifs that go with this paper. I use the 36x51cm version. 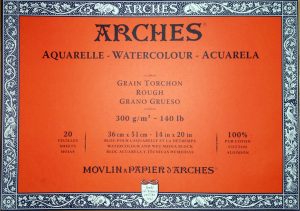 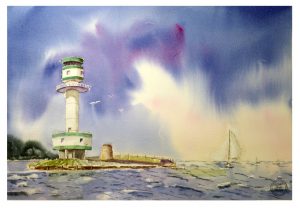 I am fully configured again

After the big Windows update, I got a lot of streaming tools on my ears. I hardly need any special adjustments for that. Today I completely reconfigured my Twitch control, also for Zoom and Youtube. All cameras work at the same time and the image / sound synchronization also works! Yes, there is a lot of passion in it everywhere.

Attention! Streaming times are brought forward by one hour!

Yesterday I spotted Arches Torchon Paper again. (See above) – I had a lot of fun and so it turned out to be over 8 hours of livestream again. And today I’m a little worn out. The 2 pictures that I have painted are stored in the “Practises” gallery. The lighthouse took a little longer because I had sketched it out.

Now I have a few days to pursue my little pencil sketches.

Suggestions for the chat implemented

On Tuesday I was made aware that it would be nice to include chat commands. Said and done! I’ve created a couple of commands. For example, to look at the reference picture, call up my homepage, Instagram, etc. – I have also integrated a TTS into my Twitch Chat, which also works in OBS. At the start on Sunday I will fully activate TTS. There aren’t that many people on Twitch on Sunday. When this function has become known, I will put a command behind it. I will put all commands in the stream in the ticker. Other things that make chatting even more interesting only work with the affiliate anyway. But it will take some time until then, if at all.

Update: I have now also set up the restream. This enables me to distribute my stream to many other streaming platforms. At first I will only distribute my stream on Twitch and Youtube, that is, let the stream run on both platforms at the same time. The command center is OBS Studio. Of course you can also watch the stream here on my homepage, but unfortunately without the chat function.

What’s the topic in the next stream (Sunday)

I’ve picked out quite a few topics. What it will ultimately be has not yet been determined. I tend towards a natural-realistic watercolor. I will definitely write here tomorrow or the day after tomorrow as I have decided.

Tataaaaa! It will be a portrait … I thought for a long time! I would like to save some landscape templates for September. So I’ll take a look at Pixabay to see what templates are there. It is always fun to go into a live stream so “unprepared”. But it’s just an exercise! I will provide the template in the chat via ! Ref command….

And test: This morning I tested the Restream again and everything works! Both on Twitch and on Youtube. These two platforms are enough for me for now. In the next step, the stream on my Discord server would make sense. I think that by and large concludes the technical part. So now I can concentrate fully on painting, drawing and the associated techniques again.

Unfortunately there were connection problems today. The YouTube stream was interrupted after just 38 minutes. I suspect there were problems with Restream as well. Nevertheless, the stream was saved error-free on Twitch. Therefore I will do without Restream and Youtube for the time being. So only stream on Twitch until I finally get the broadband connection.

I wasn’t quite finished with my picture. Small subtleties are still missing. Here is the result after a little over 2 hours … 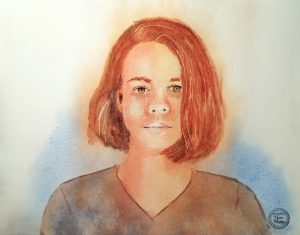